We knew from a young age that we were meant for each other. We grew up together, went to the same school, and became best friends. Me and her remained just that for many years, but it wasn’t until we matured, where I realized that I loved her.

I understood I wasn’t straight and wanted women; I wanted her. Back then, she wasn’t ready to come out as gay. Growing up, we were inseparable, and as friends, we knew there might be more.

We remained friends throughout our teen years, and in our 20s, we began connecting differently. Since then, she acknowledged to be a part of LGBT, dates with women were her thing, and… turns out she wanted me too.

So when you see a couple of adorable lesbians slowly walk in the park holding hands and laughing a lot, it might be us! Sure, we both had a different life, but the connection was strong, leading to us exploring new avenues. Eventually, we went out, started dating, and created a relationship that turned to love. A true lesbian romantic story!

2. I Was A Shop Assistant 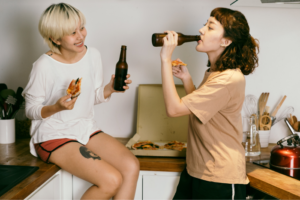 I was working as a shop assistant in my 40s. It was a job that kept me busy, and I met some wonderful people along the way. I enjoyed the job but not feeling any younger every day, I was alone, not in my place, and wanted more, but I found myself stuck.

One day, this girl came in, she was a lot younger than me, in her early 20s, but wow, she was beautiful. We got chatting, and she indicated she knew I was into gay women. Opportunities to meet people like you in public didn’t happen back then, but this was amazing.

There was teasing and flirting with the energy flowing between us. She returned the next day, and the visits became frequent. Eventually, dates were arranged, and I became that mature lesbian with a young girl!

After dates and sex, we connected and became official. I wasn’t looking for love; it just happened. Lesbian dating stories don’t come more romantic than that! I left the shop and became a happy housewife. Happy end!

3. It Began with A Bus Journey

The bus journey was a daily thing for me. I worked in the city in a banking job that I loved. I had friends who were gay women, and I had an idea I was gay. I dated men too, but girls always clicked with me instantly; it was so much easier.

Exploring my desires was something I was afraid of, but that changed one day. We locked eyes on the bus. Jenny (her name was) approached me, asked me for my number, and that was it. One phone call later, and we’re sipping cocktails in a swanky bar.

We clicked instantly and chatted the night away. After flirting, chatting, and dating, we became official in two years, and after 15 years, we’re still together. It’s a story I love telling! 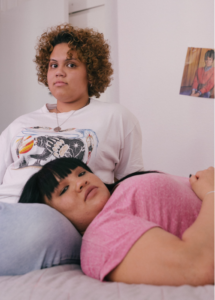 Online dating was mysterious and something I had never considered. Success stories were something I never believed; after all, love doesn’t happen online, surely? I was wrong. I was committed to my job, I worked long hours, and dating wasn’t on my radar.

After 12 hours working in the office, meeting people was the last thing on my mind. Eventually, I decided to join a dating site for lesbians. I was nervous, anxious, but I dived in. The experience amazed me!. There were thousands of people looking for love like me!

I just searched for gay women, connected with gals, and chatted all night long, and I was even late to work; it never happened to me before.

Denise blew me away. She seemed funny, professional, and dating online was a new experience for her too. It took months to build up our relationship. We reached a point where we chatted on the phone and held video calls together.

She was as beautiful as she was in her photos. I couldn’t believe my luck, and I pinched myself daily! We exchanged messages every day, but we had never met. It reached a point where one of us had to make a move.

I took the plunge by asking her on a date. She agreed! We arranged to meet at a local bar, and once we met, we connected even further. We laughed all night, chatted and drank, and eventually ended up at her place. The rest is history! We now have a house, children and live a life that we have both created together; it’s amazing!